Skip to content
Notice: Current shipping times are longer than expected due to COVID-19. Close
Previous Next

Narrow History Today’s reels come in a variety of sizes both in diameter and width, with a choice of gear ratios, handle and knob configurations and in a rainbow of cosmetic colors. With the combinations available for today’s anglers, there seems to be a little confusion when looking to make a buying decision. One question we hear a lot is “Why would I need a narrower reel?”.

Narrow reels have been on the market for years with Penn offering a 4/0 and 6/0 in both narrow and wide as well as Carl Newell having a good selection of them in their graphite series when they were in business. When we say a “Narrow Reel”, the width is 3/4″ to 1″ narrower than the basic reel offered in the manufacturer’s line. Narrow reels definitely have a place and time to use them. The last resurgence of narrow reels was seen when the “butterfly jigging” craze hit the states 12 or so years ago. These narrow reels were a lot easier to handle and thus have become standard issue for today’s anglers for specific techniques like jigging and bait fishing throughout the States and around the world.

Narrow reels have become very popular with anglers as specific techniques continue to evolve with the use of braid. Fifteen years ago most anglers were using larger reels loaded with monofilament. With the innovation of braided lines, tackle continues to get smaller and more efficient in regards to drag, gearing, torque and creating more power in a smaller package. This type of technology spawned Accurate’s “Small Reels-Big Fish” focus where narrow reels are added to angler’s arsenals and have become tools of progressive anglers worldwide.

Narrow reels are smaller and tend to be a lot easier to handle in most fishing situations. They have less side to side motion when you are turning the handle so you are fighting the fish rather than fighting your tackle. With the introduction of Japanese jigging to the United States some 12 years ago, the focus on narrow reels was on the radar. Jigging reels, coupled with light weight, smaller, more parabolic rods, created a whole new phase of tackle for people fishing in shallower water. The constant circular jigging motion with metal jigs once popular among the masses is slowly being replaced with anglers using this tackle to catch a myriad of fish throughout the coastal waters of the US.

Fishing with narrow reels has become more popular in different parts of the United States as they are using specific techniques for local gamefish. Many anglers here in California have adopted the 500N size reels for what they call “YoYo” fishing in waters of 200 to 300 feet or shallower for Yellowtail. The basic setup includes a 500N with either single or 2-speed loaded with 325 yards of 50 lb braid. The rod they are using is 7′ graphite/glass construction with a medium to fast tip and a slower action backbone. The basic technique is to drop a 2 to 5 ounce metal jig to the bottom and wind it up 20 to 50 feet as fast as they can then dropping it right back down and doing it all over again. The narrow reel they are using offers two key things that make this the right reel for the job. Firstly the narrow spool requires less attention to minding the line when winding it in and dropping it down. The second thing is being able to use your thumb to stop the spool in critical stages such as being bit on the drop which could easily end up as a backlashed reel and lost fish. Your whole thumb takes up the width of the spool making it a lot easier to regulate speed as well as stop the spool if necessary when bit on the sink so you can get the reel into gear. Alaska has a similar technique for silver salmon and they also use the 500N with 40 lb braid as a weapon of choice. I think there are local techniques throughout the states that would require similar gear with the same ability to react to whatever the gamefish is dictating in that situation.

Accurate makes four narrow reels available in the Fury, Boss and Dauntless that include a 400N, 500N, 600N, 600NN and the new BV-300. These are some of the combos we use for fishing throughout our travels here and abroad: 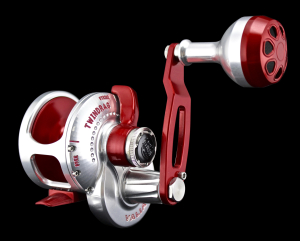 “Valiant” BV-300 with a 15-25lb rating 8 foot trigger stick with 30lb braid: This is a fun outfit for shallow water jigging for rockfish, snappers, small groupers, but we also us it for pelagics. When fishing smaller baits, the small, narrow reel casts little baits like anchovies with ease. The sleeved spool helps with less friction and really no start up inertia getting the spool rolling. The Valiant earned a name for itself this year with putting both yellowfin and bluefin tuna on the deck up to 50lbs as well as dorado, yellowtail, sailfish, and queenfish in its testing time around the globe. The Valiant is easy to use, casts with ease, has a narrow spool for better control, and is easy to wind the line on with little attention. This reel puts out 20 plus pounds of drag with its patented TwinDrag® design. The Valiant is a single speed reel, but has three different arm length options that effect speed and torque. The short arm (3.5″) that comes standard on the reel is for speed. Optional arm lengths are the middle length arm (4″) which is a combination arm for speed and power. The Long arm is 4.5″ and is designed for maximum  power and torque. This reel is the closest single speed to a 2-speed we have designed to date. This reel is the only size in the Valiant series and is the first of it’s type for the Accurate line of products. 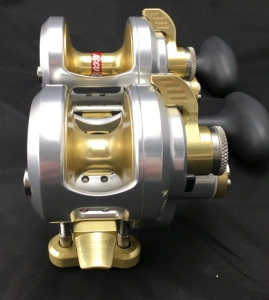 400 Narrow size is a perfect combination with our BX-7020 graphite/glass rod. This reel is a great setup for rockfish, snappers and any type of school-size gamefish. We use this combo for local coastal gamefish with live bait, jigging in 200 feet of water with 40 lb braid and a trace leader of 3 to 4 feet, as well as casting plugs and poppers for active fish. The key to this setup is how light it is when fishing with it all day versus other combinations. The small reel puts out a lot of power but the whole outfit weighs very little. It casts like a champ and will put out 24 pounds of drag when needed. It is offered with a 6.1 gear ratio and holds 300 yds of 40 lb braid. It’s also a perfect outfit for kids and smaller anglers to fish with. 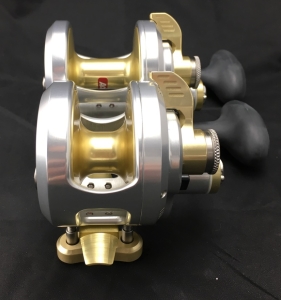 500 Narrow size  is one of the most popular narrow reels we make and is a favorite around the globe for all types of light jigging with braid to 50 lb. We coupled the 500N with our BX-7030 graphite/glass rod to target rockfish, snappers, yellowtail, white seabags and halibut, but it also works great for Blackfin tuna, Yellowfin tuna, Bluefin tuna, Cobia and whatever local quarry you are targeting. This reel has a 6.1 gear ratio and holds 325 yds of 50 lb braid. The diameter of the frame fits perfect in the palm of your hand for any application. The whole outfit is super lightweight and is a pleasure to fish with. If you are looking for the perfect outfit for hours of core fishing this is a good choice. 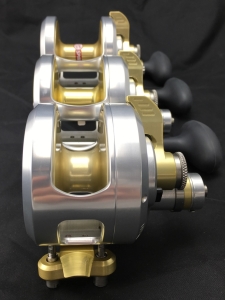 600 Narrow size has been very popular among guys fishing jigs for Bluefin tuna either by butterfly jigging or using diamond jigs. This reel has been a favorite for anglers looking to tangle with larger gamefish but wanting to keep the tackle smaller and more manageable. We have several ways we are rigging these reels for bigger opponents. We call it “Stacking Braid”, which refers to taking a smaller diameter braid like 50 lb and doing a loop to loop splice on the top with 65 lb or 80 lb braid with a top shot of 80 to 100 lb fluorocarbon leader of maybe 3 to 8 feet depending on the gamefish. We are looking to get maximum capacity on the reel which puts it up around 450 to 500 yards. Another alternative is to use hollowware braid, which lies flat, versus regular round braid. This can also be spliced with leader versus loop to loop connections. The 600N will put out 30 plus pounds of drag and comes in a 4.1 or 6.1 gear ratio in the single speed or a 2-speed with 5.1 and 2.2:1 gear ratio. The 2-speed reel is the better choice for fishing larger gamefish and will give you more cranking power for those deep digging species like tuna. The rods we use are dependent on what we are targeting. If you are using this for an all around rig, we have a BX-7040 rod which works perfect for light trolling and live bait fishing. If you are looking to fish it for jigging, get on the internet and there are plenty of people in the know willing to share information on the many rod choices out there. The 600N is definitely a reel size that the traveling angler should have in his arsenal.

600 Narrow Narrow size is specifically designed for butterfly jigging. Its big diameter spool and narrow width makes it easy to use in the circular jigging motion and fits nicely into the palm of your hand. These reels are extremely powerful and come in 4.1 and 6.1 single speed form and a 2-speed model with 5.1 and 2.2:1 gear ratios. The 600 size will retrieve between 33″ to 39″ depending on gear ratio, puts out 38 lbs of drag and alleviates any side to side torque while fighting a fish. This reel coupled with a 400 to 500 gram jigging rod will put them on the deck. For guys looking to ‘Yo -Yo” with them, a 7’ fast tip rod with medium backbone will work perfect together putting more pressure on the fish while letting you wind the line over a more parabolic           rod creating a more comfortable situation for you. If you spend a lot of time jigging, the 600NN should be included in your travel gear.

All the reel sizes discussed above, excluding the BV-300, are offered in the FURY and BOSS series and come in both single and 2-speed models. The DAUNTLESS is offered as a 2-speed model. They have stainless steel gears and come with a stainless steel ARB with seals for increased corrosion resistance. The Dauntless also features synced dogs in addition to the ARB for the ultimate in stopping power. If you have any questions on the reels mentioned in this article you can visit us at: www.accuratefishing.com or call us directly 888-222-8372.

We hope this blog helps you better understand going narrow. Thanks for the support.