One of the most important features on a reel is the drag which gives you the ability to regulate the amount of line coming off the reel and at what speed. Being a reel manufacturer we have studied reel drags from the very beginning of our journey to build the revolutionary Accurate TwinDrag® reels . 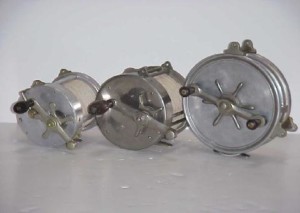 In the beginning it was not so easy as there was basically one type of drag on the market in the early years. The pioneers of the sport had linen line on their reels and applied drag pressure with leather thumb stall that were attached to reel from the bottom. Imagine putting the heat to a fish by cupping the reel’s spool with your hands. 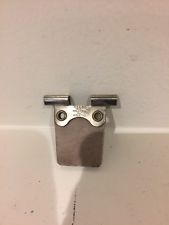 Talk about some heat, can’t imagine anything more painful even with a pair of gloves on. These reels were known as knuckle busters as the handle would also spin backwards if enough pressure was not applied.

After some well thought out ideas earlier reel manufacturers figured out how to use an anti reverse system.

It was not perfect by any means but took the anglers “hands” out of the equation as the spool breaking system. With constant progress the fishing pioneers figured out a stacked washer drag that worked well with the new “Star Drag system” and the rest was history. 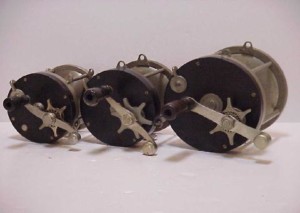 As time went on great minds figured out the addition of the Anti Reverse Bearing which is seen in most saltwater reels in todays market. What we wanted to talk about is the two basic drag systems in reels today and the how they work.

The two basic drags on the market today are the initial Star Drag reel which is loosen and tighten by a star on the handle side of the reel which uses a stack of carbon fiber and metal washers, plus some cup washers inside the main gear on the handle shaft to apply pressure to the gear so the gear engages with the pinion gear to move spool. The stack washer reels were developed years ago and have been a staple of the fishing market for years. Main problem with the stack washers is that over time the constant tightening – loosening of the cup washers and fiber washer stack compresses the stack which leaves the reel with less total drag spectrum. This means that when a drag washer stack is new you have more ability to adjust the drag with several turns of the star versus when the washers are compressed you might make a full turn and go from free spool to full with the end result breaking a fish off. One common thought with star drag reels is there is no way to actually know where the drag setting is once you start to move the star forward. In essence you are driving in the dark with out lights so it is really important to pull line off the spool as you tighten the star drag to understand what kind of drag you are applying to the fish. (Super important to understand the dynamics of how much line is on the spool too as it will cause a big spike in drag the less line that is on the spool. Remember if you start with a full spool at 8 lbs of drag it is double as half the line is out at 16lbs of drag.) 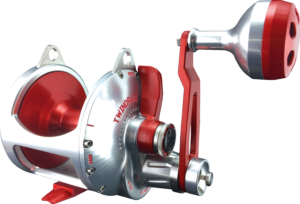 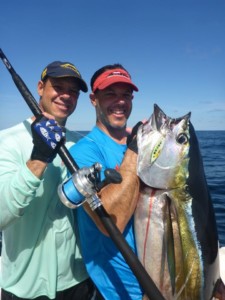 Twins Of TwinDrag with a Lever drag Yellowfin Tuna.

The second type of drag on the market is a lever drag which uses a carbon fiber drag washer on the side of the spool closest to the arm and lever. The lever drag was born in the late 1960’s and continued to progress through the years until todays well designed reels that see continued innovation from todays manufacturers. Some of the early reels with a graduated lever drag included Finnor, Penn, and the Shimano TLD reels that were very popular with anglers worldwide. The Lever drag reel operates a little different than the stacked Star Drag reels. These reels have the Fiber Drag washer inside one side of the spool closest to the arm and lever. As the angler puts the lever forward there is a metal friction drag washer that comes into contact of the carbon fiber washer on the inside of the spool. When more drag is needed the angler pushes the lever to strike which is set prior to fishing. Most drag settings at start are set to a 1/4 to a 1/3 of the breaking strength of the line by anglers before even putting a lure or bait out. The strike setting is usually set accordingly to size of line. If an angler continues to move the lever forward in search of more drag to stop a hard fighting fish they are above the strike stop and move to the full setting. The full setting on a reel is pretty much no drag so its a hold onto your rod or its out of your hands. I think the only time people are looking at going to full is when the fish is in its last ditch effort and you need to move him your way to the gaff. One good thing about lever drag reels is you have some idea how much drag you are putting on the fish just by knowing the increments of the drag as going forward up towards the strike stop and beyond to full. Some reels have divits or notches on the side plate the give the drag a graduated distance leaving the lever in a position not to move back or forth without pressure.

Most of these Lever drag reels with this type of drag calibration click forward and back giving anglers the security of a solid stop once they find their desired drag setting. The lever drag reels seem to have always been offered in the larger big game reels until recent years where manufacturers started to design smaller reels that could put out more drag and the lever drag was more effective as the amount of fishable drag came into play. 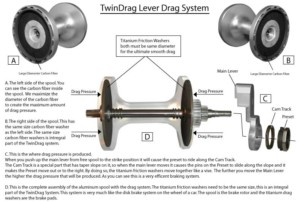 The last type of drag system on the market is the Accurate patented TwinDrag® reels developed by actual Twin brothers, Dave and Doug Nilsen in the early 1990’s. The idea came to them as they were changing their brakes on a truck looking at the disc brakes. They thought to themselves why wouldn’t this work on a reel so the idea was born and the rest is history. The boys looked at doing a ATD-30 size reel for tuna fishing on the Long Range boats and that initial model spawned a whole series of TwinDrag® reels including todays Valiant BV reels the Next Generation of reels. What makes a TwinDrag® reel so unique is the ability to put an equal amount of pressure on both sides of the spool which creates more drag surface and a very smooth drag with the wet carbon fiber drag material. The design has a drag washer on both sides of the spool with a titanium friction washer. As a fish is taking line the angler can see that he can apply more drag moving the lever drag forward and not feel any binding or jerky response. Because there are two drag surfaces there is more potential drag possible out of the reel. With the wet drag surfaces you see no start up inertia on the first run and most of the time the drag is working you can watch tip of your rod and its not moving like other sometime jerky drags.

The TwinDrag® has created the opportunity to design smaller reels with the innovation braid to fish bigger fish with enough drag and line capacity making it a more enjoyable experience versus fighting the fish and dealing with the bulky tackle of yesteryear.  The other thing that helps all reels now a days is a quality Anti Reverse Bearing which gives you the piece of mind when doing combat with a larger adversary. Accurate has developed a new Stainless Steel ARB which has worked flawlessly since its inception. In the past people would comment that Lever Drag reels couldn’t cast as well as Stardrag reels. That could have been true in the past but Accurate has created a sleeve free spool on all its reels which gives the reels excellent castibility which has changed a lot of opinions out there.

The key to a good reel is going to be the drag. Know what kind of drag and line capacity you need for the gamefish you are targeting. Once you figure that out you can look at the various drags on the market that fit your needs.

Wishing you and yours good fishing.

Your friends at Team Accurate.