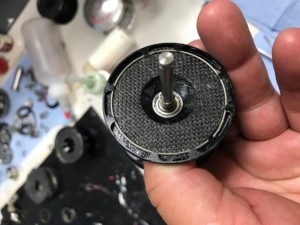 One side of a TwinDrag® spool design.

We get asked a lot the difference between TwinDrag® reels and a basic single drag reel and this blog is to answer that question in layman terms. TwinDrag® reels are very similar to disc brakes. We have a drag on each side of the spool which is recessed into the spool. Each side has a friction plate that applies pressure to each side of the spool. The friction plates apply equal amount of pressure on each side of the spool. The results are a greater drag surface versus a stacked washer system. Two main factors that work in your favor is that greater drag surface equals more drag so a smaller  TwinDrag® reel can produce more drag than other single drag reels its size and bigger. The second factor is that Accurate uses wet drag washers which give you the smoothest drag possible. If you watch your rod tip as the fish takes line there is little to none movement of the tip. Why? The wet TwinDrag® has very little or no start up inertia like other reels. Some reels set at higher drag settings will lurch forward and you will see a difference of unto 4 lbs of drag at that point which will subside once the spool starts moving. This type of surge in drag often causes fish to break off so it is important to know and if using stacked or single drag reels set your drag tension accordingly.

The other thing to look into is proper drag adjustment while fishing. These are two basic types of reels, a star drag reel and a Lever drag reel. The Star set reels have been around for ages and the basis of the reel is to compress the stack washers to get maximum amount of drag. This type of reel has worked throughout the years with success but some of the set backs the drag washer stacks compressing losing the ability to offer a greater drag range as the reel is used throughout its life time. When they are new you can move the start and the increments are smaller but once you compress and loosen the drag, the washers take a set and become thinner making your drag range less. This sometimes makes over tightening the drag a very real problem. When originally a half turn was 1 to 2 lbs it can gravitate up to 3 or 4 lbs causing problems for the angler especially with fishing lighter line. This is very similar to driving a car in the dark not knowing exactly where you are which can lead to big problems i.e. a loss fish. 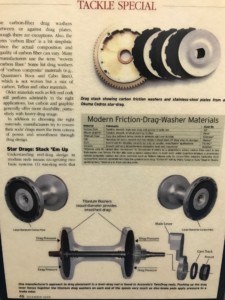 The other type of drag adjustment is a lever drag. This lets you adjust your drag in increments and you are able to have some accuracy with knowing your drag setting while fighting a fish. The other positives with a lever drag is a set strike drag post not letting you go up with the drag unless pushing in the stop. Same with the free spool adjustment knowing there is a stop when backing off a drag helps you avoid considerable backlashes if the reel goes into freespool with a fish on. The lever drag settings might change 1 to 2 lbs but does not deviate as radical as a stacked drag reel with flatten washers.

Couple other interesting points: Over the years hardcore surface iron guys swore that the star drag reels would cast better than the lever drag reels. This could have been true but with the evolution of the sleeved spool, the lever drag reels can now cast as far as your thumb is educated. Spool speed is not an issue as it was once perceived.

The evolution of reels is a continuous movement and as we promote “Small Reels Big Fish” we see the size of reel getter smaller and the size of fish getting bigger. With the introduction of super Braids and the development of better drags the fishing world as we know it will continue to advance.

Tight lines to you.