Skip to content
Notice: Current shipping times are longer than expected due to COVID-19. Close
Previous Next 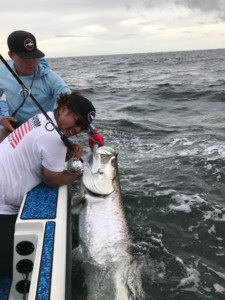 Kozo with his first Tarpon

July in the fishing industry welcomes the annual ICAST show in Orlando, Florida. The who’s who’s of fishing tackle is present at this show to introduce new products or display existing products to the domestic dealers as well as global distributors throughout the world. This show is the biggest dealer show in the world where you can see the biggest names in the industry with the coolest, new fishing products hitting the market in the near future. Some of the companies include Pure Fishing, Daiwa, Shimano, Costa Del Mar, Mustad, Owner, Strike King, Gamakatsu, Lucky craft, and the list goes on. 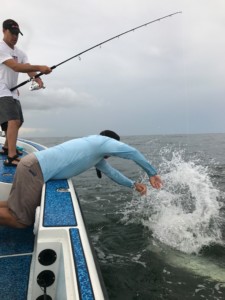 Dave Nilsen and Capt Matt doing a magic trick with a big Tarpon.

Accurate has been attending this show 20 plus years as an exhibitor and usually the show moves from city to city but for the last five years its been in Orlando which gave Team Accurate the opportunity to fly into Florida a few days early for a fishing adventure.

This year we decided to fly into Fort Meyers on the west coast of Florida to partake in some inshore fishing that included the elusive Snook, Goliath Grouper, and the coveted Silver King aka Tarpon. We got in late Saturday night to fish Sunday and Monday with Matt Haag, well known Florida guide and part of Team Accurate Pro Staff. Sunday morning came early and the coffee did its best to open our eyes with little sleep and a three hour time change our crew made it to the awaiting inshore boats ready for what the day had in store for us. 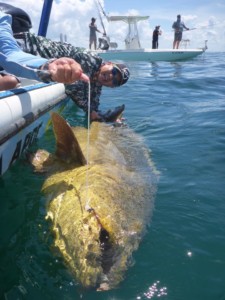 Alvin with his Giant Goliath Grouper

We were fishing one of the premiere tarpon spots on the east coast, Boca Grande Pass, known for huge schools of Tarpon that moved in and out of the pass on the tides. The area around the pass also was home to Snook, Redfish, Sea Trout, and the Goliath grouper. Each day we spent the morning fishing either Snook on the beach with live bait, smaller Tarpon on the flats with Bait Busters, or we would move offshore to fish wrecks for Goliath groupers. As the afternoon tide would start coming in the Tarpon would start to filter into the pass in groups of 10 to 20 fish. The game is a visual one where you are casting a small pass crab which we would catch in the evening on our way in on grass lines on the current breaks , the Tarpon are porpoising on the surface in small groups and key is to cast crabs in front of school as they swim by. Might sound simple but the wind and the weight of the crab can be very difficult to make the cast required to get bit impossible. Some of us were fishing conventional set ups with the Valiant 300 with a longer rod which was doing the trick down wind. I actually focused on my SR-6 with a 7.5′ Cousins rod which gave me the ability to get the distance in my casts both into the wind and down wind when possible. Its personal preference but spinning in windy conditions will help you get the bait where it needs to be. Important to make sure you stay in contact with the bait also which means winding up your slack after all your cast then feathering spool as the bail is open to detect the bite. 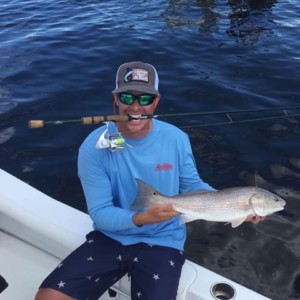 Austin Collins with a nice redfish caught inside the pass

The first day of fishing saw our three groups of anglers catch some tarpon, few snook, reds, and some Goliath Groupers. Team Accurate was having a great time but the Tarpon fishing was just ok with each boat getting just a few shots and some of the guys catching a few fish off the opportunities given.

Day 2 was a completely different story. Matt Hagg picked me, the twins, Alvin, and Kozo up at the dock heading to some inshore flats. Word on the street was there were some smaller tarpon rolling around and biting a DOA lure called a Bait Buster. We pulled into position and watched 20 to 50 lb tarpon roll on the surface feeding on small baitfish. Matt handed out the Bait Busters and we got busy casting on the fish we saw looking for a reaction strike. 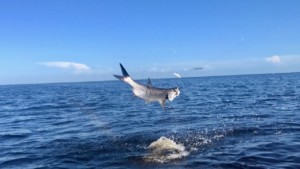 I got lucky and won the lottery getting an absolute blow up which ending up with a 40lb tarpon giving us a full aerial show. Tarpon are an absolute blast to catch with their aerial game. As they say bow to the silver king, I was definitely on point making sure every time he went up my rod tip went down. After a few minutes the fish slowed down so we could pick him up and get a picture. These are the most beautiful fish looking like a silver dinosaur from the beginning of time. We got him rejuvenated and off he went back into waters of the flat. That was the only fish we came upon on the first spot. The guys had never caught snook so we headed to the outside shores of the gulf to find some wood on the beach which tends to be the neighborhood these animals like to live in. Matt knows his area like the back of his hand and within twenty minutes both Alvin and Kozu were catching snook off a wood pile. The diversity of the fisheries within the area is refreshing knowing that if one species is not biting there is another one available to try. 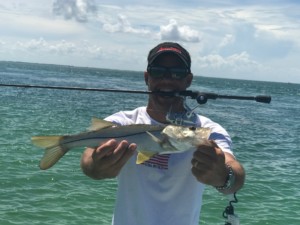 Dave Nilsen with a snook on the beach.

When the snook fishing fizzled out we headed for the Boca Pass to start looking for the Tarpon schools as the tide started to flow into the pass. The fish are in 20 to 50 feet of water so its not flats fishing per say. The weather is always unpredictable in Florida and this day was no different as we headed to Boca to locate the Tarpon. Capt Matt knows his weather and was watching a very dark, if not black wall of weather moving right at us. The winds starting to show us a bit of action and there were other boats already in the pass on fish. As the weather started to progress we saw wind that was 25 to 30 knots and the wall of weather was on its way. All the boats in the pass ran for shelter and our crew was pretty sure that was in our future. Capt Matt looked at us and said I think this will travel around us. We had all experienced rough weather in our fishing travels and decided to wait it out. In all the days on the water every so often you get one that goes from complete nightmare to the absolute best ever. This day was such a day. 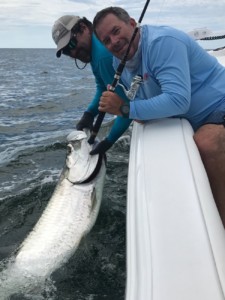 Another fatty on the SR-6. Put your mind to it and all is possible.

The Boca Grande pass with weather on it was pretty rough and totally uncomfortable for about 20 to 30 minutes then as Matt had thought the storm passed leaving us the only boat in the pass. Like a dream come true we were baiting and hooking tarpon from 3 pm to dark getting 9 bites and landing 4 or 5 fish all larger models in the 100 to 140 pond class. All of us were amazed on the pure aerial display we watched from each of these fish. After about 2 hours by ourselves the boats started showing up. The fish went on the bite and we watched all the boats around us hooking fish with Tarpon in the air everywhere you looked. Those type of bites happen once in a blue moon and we were blessed to see this type of action. After two complete days of fishing we were sunburned with aching muscles not looking forward to our drive to Orlando and the show setup the following morning. Cool thing is we had that fired up feeling knowing we experienced a rare window of opportunity that gave us some of the best tarpon fishing we could have ever hoped for. 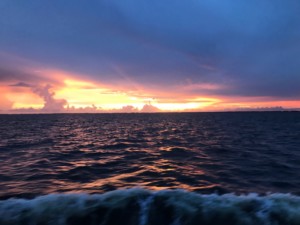 The end to a beautiful trip. The view as we are running in. Boca Grande Pass is a place were dreams come true. Till next time.

Thanks to Capt Matt for his sixth sense in weather and understanding what the possible outcomes might be.

If you get a chance to fish Boca Grande pass look up Captain Matts guide service. He and his crew know the area and produce fish of a lifetime.

Hope all your lines are tight ones.