Boss 600 Brings Tournament Fish Up on the Reel Anarchy 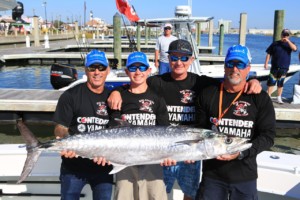 Tournament King Mackerel fishing is hectic and uncontrollable for all captains and anglers, especially when there is 115,000 thousand dollars on the line and the title of National Champion.  Heads all turn at the sound of that loud but beautiful Ssssssssssssss sound an Accurate makes when a Kingfish goes ballistic. Combined with the hard to master kite fishing technique and you can have some of the most exciting moments of your life. Trust me when I tell you I was shaking a little bit over this one Tournament, the 2015 SKA National Championship in North Carolina. I had a feeling that this one was not going to be like the others.

The week starts with a plane ride to North Carolina, upon arrival I am greeted with the warm face of my Captain, Floyd Miller. Floyd and I met around three years ago when I was asked to be brought on the boat as the Junior Angler for the Reel Anarchy Fishing Team.

We caught nice big bluefish to use as our bait for the next two days in North Carolina and just like that we are ready to roll out for the 2015 SKA Nationals. As we were getting setup to leave the docks on Day 1 I remember seeing a penny on the ground, I later found myself amongst my team mates on the bow throwing pennies wishing for good luck and there to be big fish caught. We checked in and were in the inlet waiting for the all clear to head out and fish but there was one very important obstacle between some 150 boats and the final destination, Drum Inlet. The inlet is one of the worst in the world, big looping swells almost as high as the 28′ Contender T-top. Boats are going everywhere as we traverse this dangerous water way trying to reach the gold that was at the end of the rainbow. We eventually made it through the inlet and now it was time to fish.

As Dad and I setup our ‘Secret Weapon’ the kite, Floyd and Donny Bennett were working on the flat lines out back. We put two big blue fish out on the clips attached to the kite and I was left to man the rods. The chaos first started as that elusive King lurked beneath my bait, almost eyeing it up. Then out of nowhere it strikes in fashion, going up 20ft in the air attacking my long bait, with the blood from the fresh cut it made in the blue fish running along its mouth. I picked up the rod and started yelling, “big fish, big fish.” Winding the blue and red Boss Accurate to get the slack out of the line and finally I was tight and waved for my team to bring in lines and get the fish. The king waved its tail and started on a big run, the Ssssssss from the reel told us all that this is the one and we needed to be perfect in order to get it in the boat. I worked the fish back to the boat with ease and as she neared you could hear the beating of my heart and the team’s. Dad got the 12′ gaff ready, its tip as sharp as an arrow, as Floyd drove the boat steady they waited as I slowly brought the fish out of the depths. When she came surfing up just below the water, my dad stuck her perfectly in the back. Pulling her in we could see the head and girth of the King Mackerel and as she hit the deck we all went up in a mighty roar! High fives and hugs were going around and we slowly slid her beneath the ice as we headed to weigh in. In the shadows of grand stands and live coverage the Reel Anarchy team weighed the fish in as the scale signaled 51.94, the biggest Open class fish of the day and my new Personal Best.

To conclude the Reel Anarchy weighed in a 40.52 on day 2 to win the tournament and bring in an estimated 115,000 dollars. The team’s two fish accounted for 92.46 pounds beating second place by almost thirteen pounds. Thanks for the great products Accurate, you are making a revolution in fishing reels and the Reel Anarchy Team is proud to represent you.

Thanks for the nice Blog and Congrats on your big win. Accurate is stoked to be a part of such a great honor.