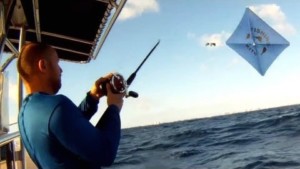 Go Fly A kite? Todays fisheries see increased boat pressure, more anglers looking for the fish of a lifetime, and fisheries we have not seen exist in our lifetime reemerging, people are looking for ways to increase their percentage for bites. With all these factors staring us right in the eye the emergence of the kite has been accepted with open arms especially here on the West Coast for the big Bluefin that have shown up in the last 3 years.

Kite fishing was developed in Catalina Island at the turn of the century by George Farnsworth for anglers targeting both Bluefin tuna and Swordfish with rigged flying fish. The Tuna Club was the starting point for those anglers thinking outside the box rigging their kites directly to the line to get the desired distance between the boat and the fish. The kite presentation of the bait is the stealthiest way to put a trolled lure or a live bait in front of weary gamefish that are put down by boats in close proximity. 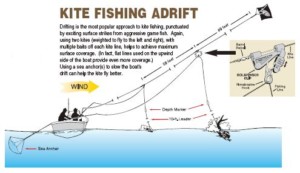 Kite fishing has grown in popularity throughout the United States and the world for a variety of gamefish. In florida
and along the eastern seaboard anglers target both Sailfish and White Marlin with Kites depending on conditions. The Sailfish fishery in florida is predominately done with kite using as many as three baits per kite that are situated around 60 feet apart. If they are flying two kites, they can present 6 baits which is a pretty normal pattern for kite fishing. The key to sail fishing with kites is keeping your drags to a minimal setting. Most of the time there are multiple hook ups with up to four fish moving in different directions which means some quick thinking and anglers knowing how much drag is the right drag. Many of the guys are using 20 lb monofilament with 60 lb leader so its important to watch the drag and really key in to watch the possible bows on the line in the water. Just the pressure of the fish pulling line in the water with a bow can break the line. The line will break strictly on the water friction traveling through the water at speed. The captains are always aware of this and when following fish with a lot of line out will follow the line instead of the fish. 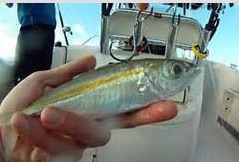 Hearty Goggle Eye which is bait of choice

Kite fishing is one of the most productive ways to fish period. The East Coast has perfected the technique of live baiting with the kite and the amount of fish caught in Sailfish Tournaments on live bait (Goggle eyes) in a multi day tournament often exceeds 100+ fish with many of the boats in the hunt for the win catching 20 plus fish during a two or three day tournament.

Tuna fishing with kites has been popular throughout the world. Guys fish giant Bluefin with kites and fish focus water movement on the surface. The bites are spectacular, seeing the quality of fish and the ability to hook them on bigger lines because all you they see is the bait which gives you a better percentage of getting the bait and landing the fish. 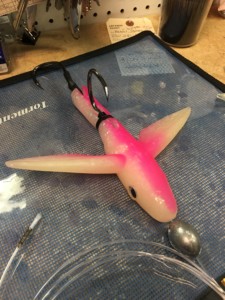 In Puerta Vallarta they troll artificial flying fish called Yummy flyers on kites up and down porpoise schools for the big Yellowfin Tuna which is very visual and often ends with fish in the 200 to 300 pound range. Many days there is not enough wind to fly the kite so those captains in the know take a 48″ party ballon and tape it to a kite which gives the kite the lift to get into the air and present the yummy flyer on the surface. There are several ways and speeds but the best is to get the wings on the flyer to look like a rain bird (looks like a Flying Fish taking flight) on the water some guys like skip skip jump with the bait , key is to keep the bait on the surface attracting attention. Can’t miss the blow ups (tuna misses the bait) but when the bite is there you will see the kite dip and the clip will come undone and its on. 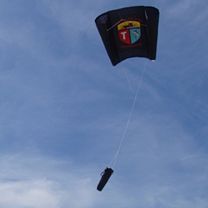 The kite enthusiasts learning the ways of the flyers have adopted this technique and it has become widely popular here on the West Coast for the new Bluefin Tuna fishery that has become prevalent for the past four years. This fishery existed at the turn of the century and no one had seen it for 100 years. These fished showed up 5 years ago getting bigger each year with several 300+ lb fish caught this year with fish around 500 lbs seen. These fish are extremely skittish and the those in the know with Puerta Vallarta kite experience, and those knowing about it, got busy figuring out how these fish would react. The key is presentation with making sure the bait is as far back and away from the boat as you can get it. The bigger the fish, the spookier they become.We are flying the Yummy flyer 100 – 200 yards or more off the port or starboard side depending on wind with yummy another 100+ yards behind that. Most of the time we are looking at the bait with Gyros making sure it is in contact with the water. Its a technique of trial and error but when you get your first bite you will never forget it. We have seen explosions like a giant fridge dropping out of the air and hitting the water. Simply awesome. This last year I saw a 300 lber go to the air after a flyer and his tail was going back and forth like he was swimming. Most awesome thing I have seen in all my years. 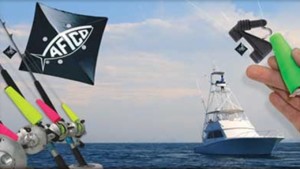 The components of a kite fishing for Sailfish.

Kites being used are dependent on where you are and what the conditions are. In Florida guys are using Bob Lewis kites, SFE kites, which come in different models depending on wind speed. The AFTCO kite comes with different spars depending on how hard the wind is blowing. With these different kites for the various wind speeds you are fishing, it is key to look into possible fishing conditions, and put the right kites on the board.

On the west coast people are using the Boston Big Game kite which flies at low wind velocity up to the windiest conditions. This is the easiest kite to use and many of the novice west coast guys get these in the air and are trolling in ten minutes. If there is relatively no wind people go to a regular kite like the AFTCO and attach a 48″ ballon to the kite which gets it in the air and makes it easy to troll the yummy or fish live bait. Key to getting the ballon up is the helium tank you buy at the party store. The thing about kites is to get them up successfully remember to quarter the wind and put the kite up on the windward side. Once up let it out to the clip attach your line then slowly let the kite out then the lure. If you do this too fast your lure will fly up out of the water and into the sky. Be patient and let line out, you will see the lure comes back down as long as it has an egg sinker weight on it that is right for the conditions. The harder the wind blows dictates a little heavier sinker. No matter what type of fishing you plan to do with the kite read up on the different techniques people are using to catch fish in your area. The web has a ton of information you can google regarding kite fishing and many techniques being practiced elsewhere can be adopted in you area its all about paying attention to the fish and their feeding habits.

If you are looking to try something different and possibly see the bite of a lifetime, Go Fly a Kite.

Hoping all your lines are tight ones.