Today’s fishing has so many different techniques and tackle used throughout the world, and people are always searching for the right terminal tackle to use, especially hooks. There is an ongoing controversy in regard to the effective use of circle hooks versus J hooks in today’s fishing. Circle hooks became very popular in the last 15 to 20 years with the big push by conservation groups for catch and release purposes. With a higher percentage of fish hooked in the corner of the mouth, circle hooks are now being adopted in most Billfish tournaments strictly because there is less stress on the fish due to preventing injury from hooking them deeper internally with a J hook.

This blog will give you a brief outline of the use of both J hooks and Circle hooks in today’s fishing.

The Circle Hooks were proven among the commercial long liners in the early 1970’s as an effective way to catch variety of commercially sought after fish. More anglers started to see the benefits of the circle hook as the information became available. The shapes of circle hooks today are very reminiscent of some of the first hooks used by Native Americans.

As conservation-minded groups continue to spread the word on our limited resources, the circle hook has been adopted by many anglers and tournaments to catch and release fish and lower the mortality rate. There have been a lot of studies by government agencies saying the circle hook and the way it hooks gamefish in the side of the jaw is less likely to hook a vital organ, with a much lower percentage of gut hooked fish, and the survival rate of the gamefish has been much higher. 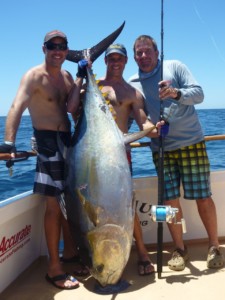 Results of a circle hook

Circle hooks have really been adopted by recreational anglers depending on species of fish targeted. Trophy hunters fishing larger yellowfin tuna have sworn by circle hooks and the hook up percentages when using different live baits. Anglers fishing Long Range in Mexico fish a lot of 6/0 to 8/0 3X and 4X strong hooks depending on bait size. 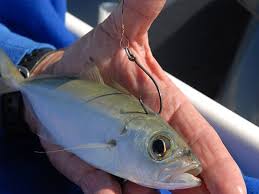 Back hooked bait with wire

They skin hook goggle eyes or Caballitos in front of the dorsal, just behind the head, as they are casting or dropping straight behind the boat while drifting. This has been a common practice for years with both Owner Super Mutu ringed hooks and Mustad Demon ringed hooks in every box in a variety of sizes to match the baits. When fishing some of the smaller sardine-type baits, a smaller circle hook is used and the baits are hooked through the cavity in their nose.

Generally, these tuna are kept as table fare so the use of the circle hook is based on the solid hookset in the corner of the mouth by the fish. The deep hooked fish are rare and the hookset in the jaw will keep these bigger tuna from wearing through the line with their teeth over time.

There is no hookset involved with circle hooks. Most of the fish hook themselves as they run away from the boat. With the tuna, we gradually push the lever up and let the rod load up, which in turn sets the hook. It is very difficult to teach people that have not used circle hooks that they do not have to swing on the fish. All you have to do is lift the rod as you go up in drag to strike.

The Sailfish anglers have been fishing circle hooks for several years, and most of the tournaments have changed the rules to make them circle hook only tournaments.

Guys fishing the kites with live baits often snell all their circle hooks and bridle their baits through the nose or back just behind the head of the bait. They keep the baits constantly on the top of the water with the circle hook resting on the nose of the bait.

Since they are using lighter lines, the snell hook will stiffen the rig slightly and help with the hookset when the hook lodges in the side of the sailfish’s mouth.

The Sailfish tournaments are big money gatherings on the east coast, and the winners are judged on the number of fish released during the multi-day event. Many of these teams can catch between high 10 to 30 fish a day. In one tournament in Miami, they had 256 Sailfish releases on the first day of the event. The circle hooks used in these events are 4/0 to 7/0 light wire hooks, depending on size of baits.

As mentioned earlier, Sailfish anglers will be fishing multiple baits – some on the kites, and other baits bridled fished closer to the boat, as well as some ready to pitch if they see tailing fish around the boat.

Many of the anglers partaking in these tournaments are looking at these fish as a renewable resource that if handled right, will catch for years to come. The mortality rate of the circle hooks in the tournaments is very low and all the bigger tournaments are catch and release only.

Another fishery that has adopted the use of the circle hooks is the salmon fishery. West Coast Salmon fishermen have been regulated to use circle hooks to reduce mortality rate of the under-sized fish that are hooked and released. The salmon fishermen on the west coast have complained that the fish once hooked in the jaw become quite active and the hooked to landed ratio has dropped. The salmon are able to throw the hook since they have a very hard membrane and it has become a lot more interesting landing the aerial gamefish. The agencies believe it’s good for the fishery, but the anglers think it is a lot more difficult to catch the fish versus the J hook days.

Halibut anglers in Alaska have also adopted circle hooks for their charters circle hooks, as mentioned earlier, are not new to the game. They have been proven over the years as a very effective way to hook fish. The J hook on the other hand has been used by recreational and commercial anglers for the majority of time.

There is a place and a time for circle hooks and J hooks, depending on species and techniques being fished. J hooks have been known to be categorized as meat fisherman hooks, but I think that is all about who is fishing them. We fish a lot of J hooks for school tuna with a lot of success with releases. I think this comes down to the amount of time you let a fish run with the bait and the size of the bait. If you have a fish like a tuna that will take a bait at usually at a high speed of movement and he turns running straight away, it’s easy to throw the reel in gear, and set up on the fish. Most of the time hooking them around the face will result in a high percentage of good releases.

Dorado caught with a Mackerel and J Hook.

When you hook a fish like a dorado or a Pacific yellowtail that will move the bait around in its mouth to swallow it, especially when fishing mackerels, you have to let them eat longer. This in turn, most likely will increase a deeper hooked fish. Many times, when using J hooks anglers, will cut the line and release the fish anyways especially if it’s still lively. They have a much better chance in the water then they have on the deck.

The catch and release ethic is very important in today’s fisheries but the real thing to understand is there is a place in today’s fishing for both the circle and the J hook. If you are looking to release fish with a lower mortality rate, the circle hook is awesome with most fisheries. The hookup rate might be a little lower, but if you are releasing fish what does it matter? 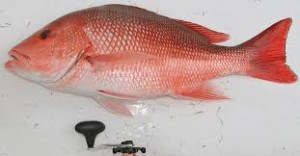 If you are fishing for table fare or trophy fish for the wall, the J hook has been proven over the years as a sure thing. If you plan on killing fish, the deeper you hook them, the faster they will die. It sounds inhumane, but most fishermen have experienced a larger gamefish, and the more they hurt the faster they come to the boat. There are those instances like when a big sword is gut-hooked fights until there is no more life in him. These marathon battles are what dreams are made of.

No matter what type of fishing you are doing, look to see what is the norm hook-wise and if you are comfortable with it, use it. Like we said before there is a place for both J hooks and circles, use what is best for you.