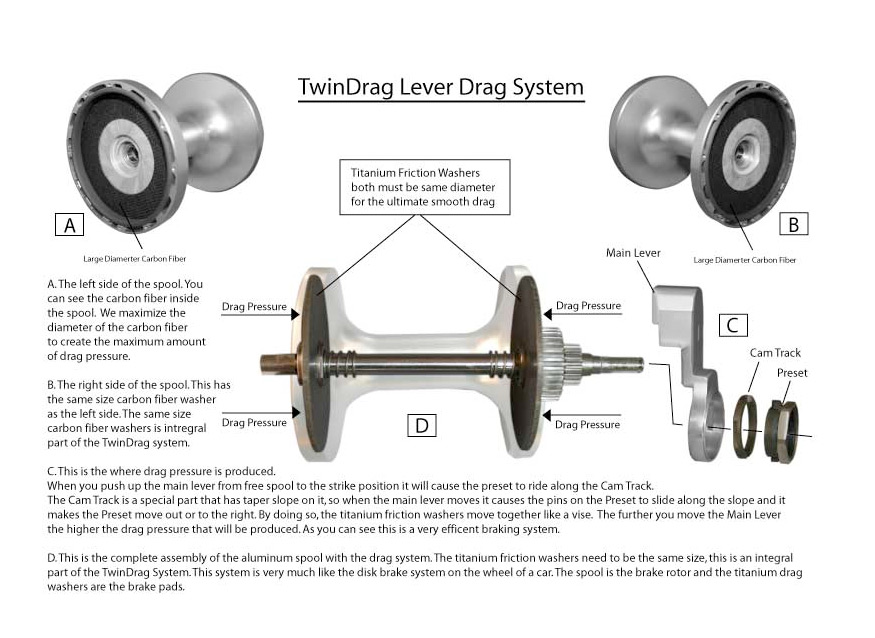 Before the introduction of our patented TwinDrag™ system, traditional fishing reel design applied drag to only one side of the reel spool. As a parallel, imagine trying to stop your car while braking was applied only to the wheels on one side. Besides veering you into a skid, such a one-sided system would create a large imbalance on moving parts, create erratic pressures and prematurely wear out brake materials.

Now imagine the increased efficiency of equal pressure applied to both sides of the spool: the bearings and spool shaft receive a more balanced load, translating into stronger, smoother drags, while the dual-drag design also doubles heat dissipation. Twin drag design also requires less pressure to be applied to each side of the spool, while allowing precise drag settings with extremely little drag fluctuation.

Here’s a simple comparison: Take a standard lever-operated, single-drag reel and a high-tech TwinDrag™ (ATD) reel, set both to the same drag pressure, for example 20 pounds. While both reels will apply the same 20 pounds of drag to a running fish, the ATD reel will accomplish this by applying only half the amount of side pressure to each side of the spool. The single-drag reel, however, applies all of its drag tension to a single side of the reel spool, promoting heat buildup and uneven, jerky drag performance. And here’s another Accurate advantage: the precision-adjusted drag of our ATD reels will fluctuate less than 1-pound in total drag range when line is drawn — at any speed — from the spool. Said another way, when the drag is set to 20 pounds on a ATD reel, drag pressure will only vary between 19.5 and 20.5 pounds, or less! Test that precision uniformity against other reels and you’ll see the difference.

Our new Platinum TwinDrag™ reels are also designed with a preset lever (the Boss ATDs have a preset knob) which allows for a precise setting of the drag range. Used in conjunction with the preset lever is a handy, graduated, alphabetical “letter” scale which takes the guesswork out of setting the drag by serving as a definitive, visual reference guide during drag adjusment.

Our ATD reels also offer excellent, unhindered freespooling in every drag-setting range from less than 1-pound to total lock-down (that’s more than 70 pounds of applied drag pressure). They’re always ready to go fishing, right out of the box, with no additional “tuning” or “blueprinting” being necessary.

What all of this means to the fisherman is that our Platinum TwinDrag™ and Boss TwinDrag™ reels apply the smoothest, best balanced, most precisely set and maintained drag pressure possible, while not falling victim to heat buildup that can cost you fish.